Pillars of Eternity II: Deadfire Update 20 - A Big Thank You for $4.4 Million!

We've reached the end of the official campaign on Fig, and it has been an amazing ride. We want to let you know how much it means to all of us on the Pillars of Eternity II: Deadfire team that you supported us with your thoughts, your contributions, and your feedback throughout the campaign. Pillars II has grown and become bigger and better than we ever imagined when we first set out at the start of this journey. 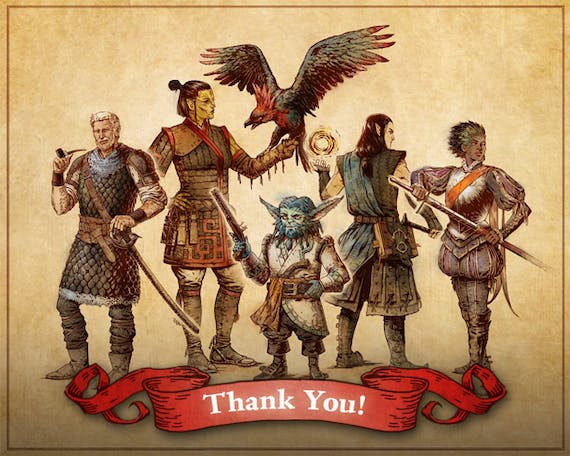 After a month-long campaign and a myriad of announcements and new additions, we were able to exceed our initial funding goal of $1.1 million by more than 400%! This makes Pillars of Eternity II: Deadfire the most crowdfunded video game since 2015, and exceeds the number achieved by Pillars I. With more than 33,600 backers, Pillars II became the most popular project ever on Fig. We're so excited about what we were able to achieve together.

If you missed out on backing us (or know someone who did), have no fear! You can still back Pillars II via the Slacker Backer Pledge button on Fig, or over at obsidian.net. For 60 days after the campaign ends (about 57 of which are left), backers can continue to pledge and receive backer rewards as if they contributed during the campaign! Even better, these contributions will count toward our remaining stretch goals of $4.5, $4.75, and $5 million dollars, which are:

When Can I Link My Pledge to the Backer Portal?

Once Fig has confirmed all of the pledges, we will be migrating them over to our Backer Portal. This will take 2-3 weeks. Once that is done, we'll let you know in an update when you can link your Fig pledge to the Backer Portal. This allows you to upgrade to a different tier if you'd like, add more add-ons, confirm your pledge, and obtain any rewards we have available now (like Pillars of Eternity I, The White March expansion, the Tyranny coupon, and "Cooking With Tim vol. 1").

Thank you for helping us make Pillars II the best game it can possibly be. We're so excited to be bringing our game to you early next year, and to watch it grow in scope from what we'd originally planned. Thank you for all of your requests and support. Because of you, Pillars II is possible.

We will continue to update you weekly about Pillars II art, lore, design, and overall progress on the game, so stay tuned!

Until next time, fellow adventurers!